RabbitMQ is a core piece of our event-driven architecture at AlphaSights. It makes our services decoupled from each other and extremely easy for a new application to start consuming the events it needs.

Sometimes, though, things go wrong and consumers can’t process a message. Usually there are two reasons for that: Either we introduced a bug that is making our worker fail or this worker depends on another service that is not available at the moment. 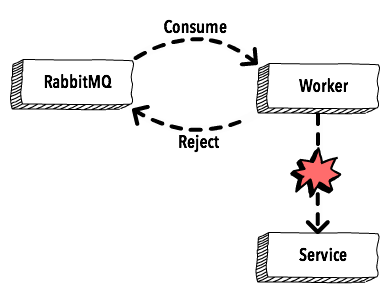 There are normally three ways to handle failures in RabbitMQ: Discarding the message, requeuing it, or sending it to a dead-letter exchange.
Assuming all the messages we receive are important, we can’t just discard them, so we have two options left.

This was our initial approach, every time a message fails, we just requeue it so we can try to process it again.
Although this can be a valid solution for simple scenarios, in our case it caused more problems than it solved. 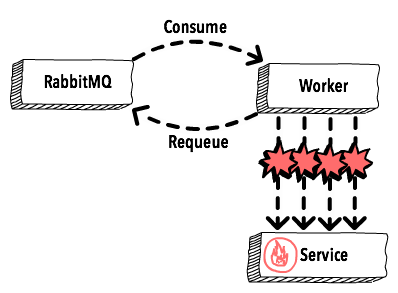 In cases where our worker is broken, just trying to process the same message again won’t help, it will just keep failing over and over again (and creating a lot of noise in your monitoring tools). The worst problem, though, is when we DDoS another service. If this service is not available due to period of high load, sending it thousands of requests is not a very good idea.

The second approach was to just send the failed messages to a dead-letter exchange, that would route it to a resting queue that we need to manually handle. After the problem is identified, we can shovel the message back to the working queue to be processed, or we can just reject the message if it doesn’t make sense to consume it anymore, that way we never DDoS other services. 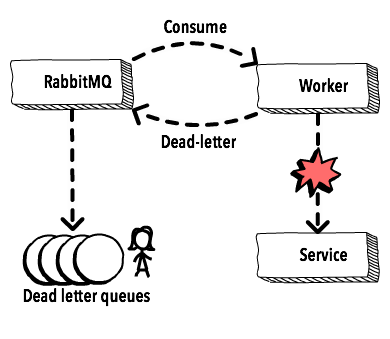 The problem now is that we have a manual step. A lot of times the failure is caused just by an intermittent issue, like a timeout, that would be solved if the message was processed again in a few seconds (or minutes).

Given these issues we were facing, having an exponential backoff strategy was the logical solution. We would not DDoS other services, and for intermittent failures, the messages would be automatically retried, avoiding the need for a manual intervention when this is not necessary. Implementing this strategy, though, was not as straightforward as we thought.

We started by looking at what other people were doing. The common approach seems to be to use a retry exchange with a per-message ttl. It works somewhat like this: 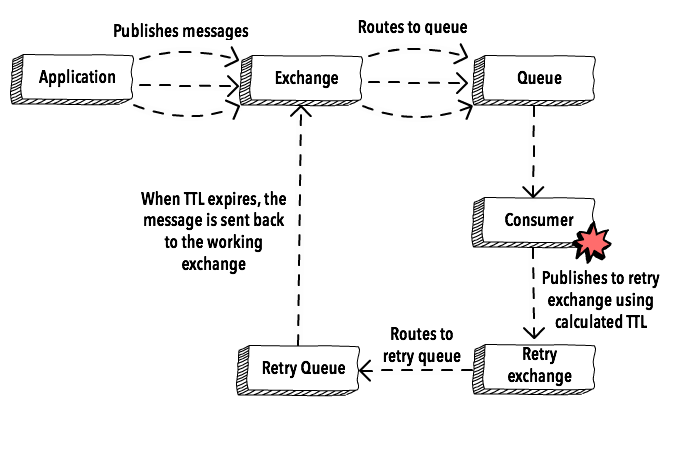 Once you understand how RabbitMQ handles time to live (TTL) and dead-letter exchanges, the implementation is straightforward:

As you probably guessed, there’s also a problem with this common approach, and it has to do with the way RabbitMQ handles expired messages. From the documentation: 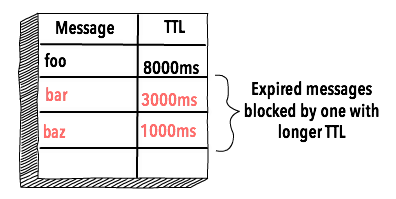 The reason is that RabbitMQ queues are always “first-in first-out”, so the time to live will just tell RabbitMQ if it should send this message to a consumer or if it can safely reject it. As the retry queue doesn’t have any consumer, the message just hangs there until it can be safely rejected.

That makes this solution impracticable, as messages with a high TTL would block messages that should be executed again shortly after they failed. So the quest continues.

And, finally, our solution

To solve this problem we came up with a solution that is very similar, but tackles this issue by dynamically creating new queues for each TTL value we have. 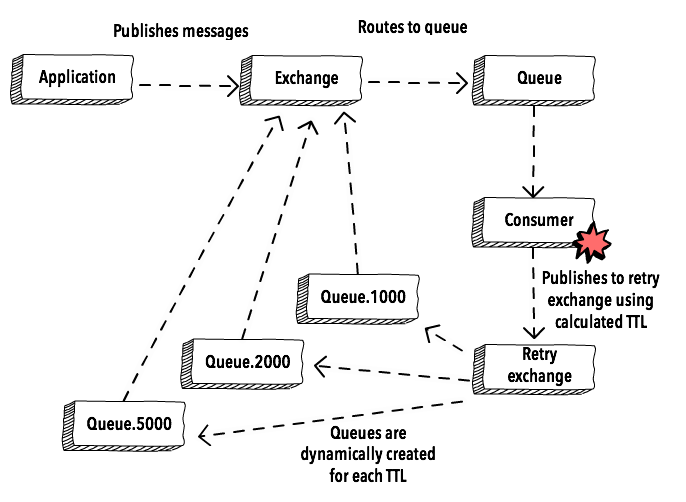 The main difference here is the creation of new queues for each TTL we have. This solve the problem with blocked messages because now every message that goes to, say, queue.5000, are message with a TTL of 5000ms, so the first message in the queue will always be the next message to expire. The rest all continues the same, when a message in any of these queues expires, it will be dead-lettered and consumed again.

To avoid keeping a bunch of empty queues after all messages are consumed, we also define these dynamically created queues with an x-expires argument, meaning that after the last message is removed from this queue, the queue itself is also deleted.

Show me the code

If you are disappointed that all you saw until now is a bunch of diagrams, here is the code we are using. It’s a Sneakers handler that does its magic every time a message fails.
The implementation, though, is just a detail, once you understand the architecture it should be simple to apply this to any other language.

We try to make our pipes as dumb as possible, and at first we had our doubts if this was adding too much complexity. In the end, though, it’s all about finding the right balance. This solution does make the messaging system a little bit less dumb, but just enough to make our systems more reliable (and our lives easier), which is what really matters.