In a distributed system we have a group of nodes that need to collaborate and send messages to each other. To achieve that they need to first answer a simple question: Who are my peers?
That’s what membership protocols do. They help each node in this system to maintain a list of nodes that are alive, notifying them when a new node joins the group, when someone intentionally leaves and when a node dies (or at least appears to be dead). SWIM, or Scalable Weakly-consistent Infection-style Process Group Membership Protocol, is one of these protocols.

Scalable Weakly-consistent Infection-style Process Group Membership Protocol is quite a long name for a protocol that seems to do such a simple thing, so let’s break down the name and understand what each piece means. This will also help us understand why this protocol was created in the first place.

Scalable: Prior to SWIM most membership protocols used a heart-beating approach, that is, each node would send a heartbeat (i.e. an empty message that just means “I’m alive!”) to every other node in the cluster, every interval T. If a node N1 doesn’t receive a heartbeat from node N2 after a certain period, it declares this node dead. This works fine for a small cluster, but as the number of nodes in this cluster increases, the number of messages that need to be sent increases quadratically. If you have 10 nodes, it may be fine to send 100 messages every second, but with 1,000 nodes you would need to send 1,000,000 messages, and that would not scale very well.

Weakly-consistent: That means that at a given point in time different nodes can have a different view of the world. They will eventually converge to the same state but we cannot expect strong consistency.

Membership: Well, that basically means we will ultimately answer the question “Who are my peers?”

Heart-beating protocols usually solve 2 different problems with the heartbeat messages: They detect when a node fails (because it stops sending the heartbeat), and they keep the list of the peers in the cluster (that is, every node that is sending a heartbeat).
SWIM decided to take the novel approach of dividing these 2 problems in different components, so it has a failure detection and a dissemination module.

Each node in the cluster will choose a node at random (say, N2) and will send a ping message, expecting to receive an ack back. This is simply a probe message and in normal circumstances it would receive this ack message and confirm that N2 is still alive.
When that doesn’t happen, though, instead of immediately marking this node as dead, it will try to probe it through other nodes. It will randomly select k other nodes from its membership list and send a ping-req(N2) message. 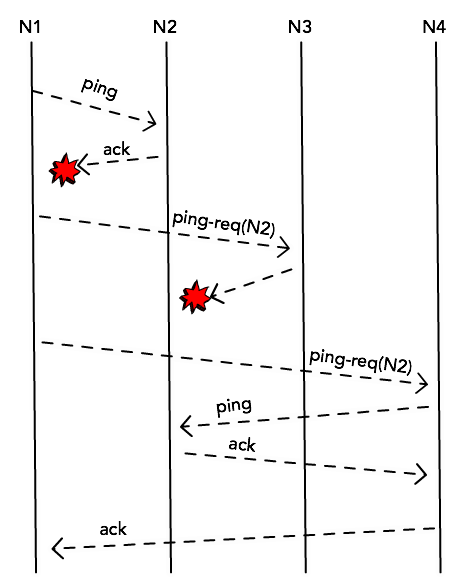 This helps to prevent false-positives when for some reason N1 cannot get a response directly from N2 (maybe because there’s a network congestion between the two), but the node is still alive and accessible by N4.

If the node cannot be accessed by any of the k members, though, it’s marked as dead. 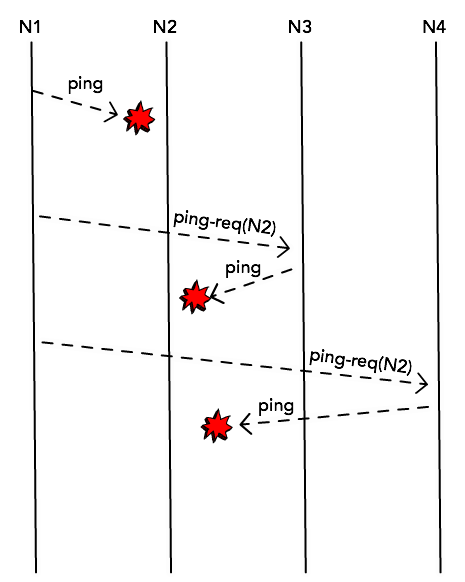 Upon detecting a node as dead, the protocol can then just multicast this information to all the other nodes in the cluster, and each node would remove N2 from its local list of peers. Information about nodes that are voluntarily leaving or joining the cluster can be multicast in a similar way. 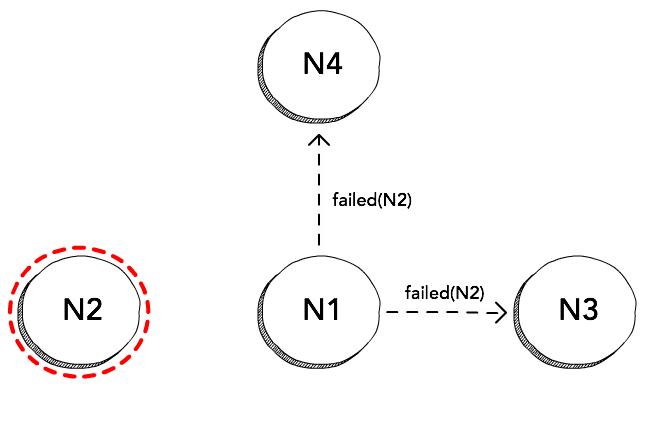 This makes for a quite simple protocol, but there a few modification that the original SWIM paper suggests to make it more robust and efficient, they are:

Let’s explore each of these points to understand what they mean and why that would be an improvement over the protocol that we have discussed thus far.

There are (at least) two issues that we need to be aware of when using this multicast primitive to disseminate information:

A better (and, in my opinion, quite elegant) solution suggested in the SWIM paper is to forget about this multicast idea, and instead use the ping, ping-req and ack messages that we use for failure detection to piggyback the information we need to disseminate. We are not adding any new messages, just leveraging the messages that we already send, and “reusing” them to also transport some information about membership updates.

Another optimization is to first suspect a node is dead, before declaring it dead. The goal here is to minimize false positives, as it is usually preferable to take longer to detect a failed node than it is to wrongly mark a healthy node as dead. It is a trade-off, though, and depending on the specific case this might not make sense.

It works like this: When a node N1 cannot receive an ack message from node N2 (neither directly, through a ping message, nor indirectly, through a ping-req message), instead of disseminating that N2 is dead and should be removed from the membership list, it just disseminates that it suspects that N2 is dead.
This suspected node is treated like a non-faulty node for all effects, and it keeps receiving ping messages like any other member. If any node can get an ack from N2, it’s marked again as alive and this information is disseminated. N2 itself can also receive a message saying it’s suspected to be dead and tell the group that they are wrong and that it never felt better.
If after a predefined timeout we don’t hear from N2, it’s then confirmed to be dead and this information is disseminated.

In the original protocol definition the node that is selected to be probed (i.e. the node we send a ping message, expecting an ack in return) is picked at random order. Although we can guarantee that eventually a node failure will be detected by every non-faulty node, this can take a relatively long time if we are out of luck with our target selection. A way to minimize this problem is to maintain a list of the members we want to probe, and go through this list in a round-robin fashion, and new joiners can be added at a random position in this list.
Using this approach we can have a time-bounded failure detection, where in the worst case it will take probe interval * number of nodes to select this faulty node.

The original paper is short and very readable. Serf, a HashiCorp tool, uses SWIM and has a nice overview in their documentation. They also talk about some modifications they made to increase propagation speed and convergence rates, and the code is open source.
Armon Dadgar, one of HashiCorp’s co-founders, also gave a very nice talk explaining the protocol and these modifications: