TCP is the protocol that guarantees we can have a reliable communication channel over an unreliable network. When we send data from a node to another, packets can be lost, they can arrive out of order, the network can be congested or the receiver node can be overloaded. When we are writing an application, though, we usually don’t need to deal with this complexity, we just write some data to a socket and TCP makes sure the packets are delivered correctly to the receiver node. Another important service that TCP provides is what is called Flow Control. Let’s talk about what that means and how TCP does its magic.

What is Flow Control (and what it’s not)

Flow Control basically means that TCP will ensure that a sender is not overwhelming a receiver by sending packets faster than it can consume. It’s pretty similar to what’s normally called Back pressure in the Distributed Systems literature. The idea is that a node receiving data will send some kind of feedback to the node sending the data to let it know about its current condition.

It’s important to understand that this is not the same as Congestion Control. Although there’s some overlap between the mechanisms TCP uses to provide both services, they are distinct features. Congestion control is about preventing a node from overwhelming the network (i.e. the links between two nodes), while Flow Control is about the end-node.

When we need to send data over a network, this is normally what happens. 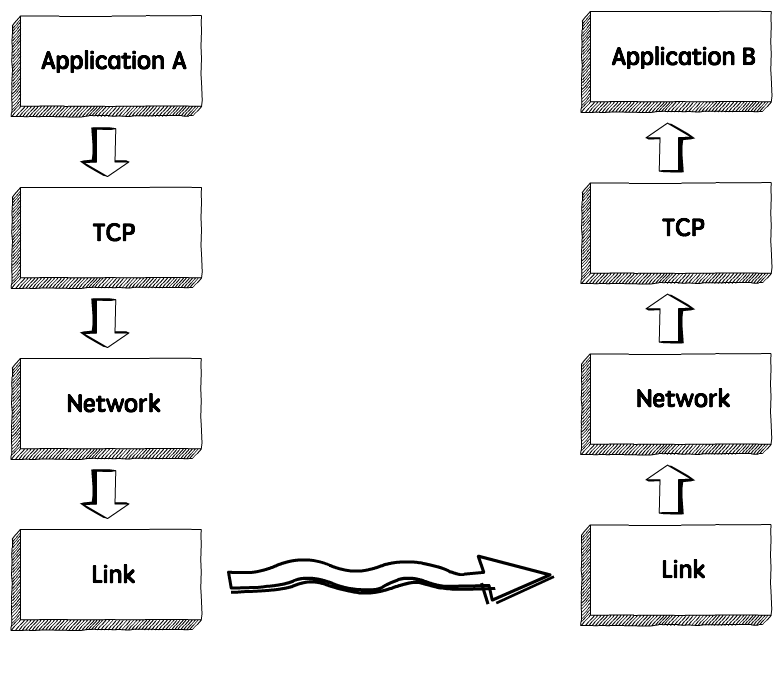 The sender application writes data to a socket, the transport layer (in our case, TCP) will wrap this data in a segment and hand it to the network layer (e.g. IP), that will somehow route this packet to the receiving node.

On the other side of this communication, the network layer will deliver this piece of data to TCP, that will make it available to the receiver application as an exact copy of the data sent, meaning if will not deliver packets out of order, and will wait for a retransmission in case it notices a gap in the byte stream.

If we zoom in, we will see something like this. 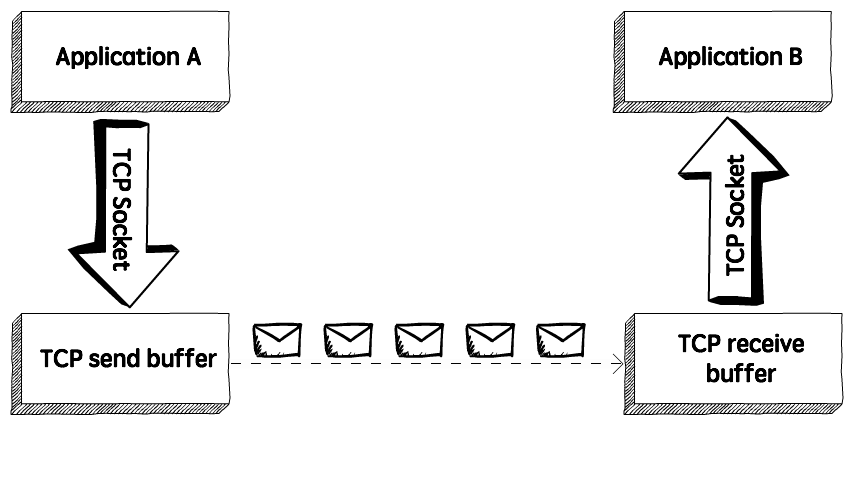 Flow Control is all about making sure we don’t send more packets when the receive buffer is already full, as the receiver wouldn’t be able to handle them and would need to drop these packets.

To control the amount of data that TCP can send, the receiver will advertise its Receive Window (rwnd), that is, the spare room in the receive buffer. 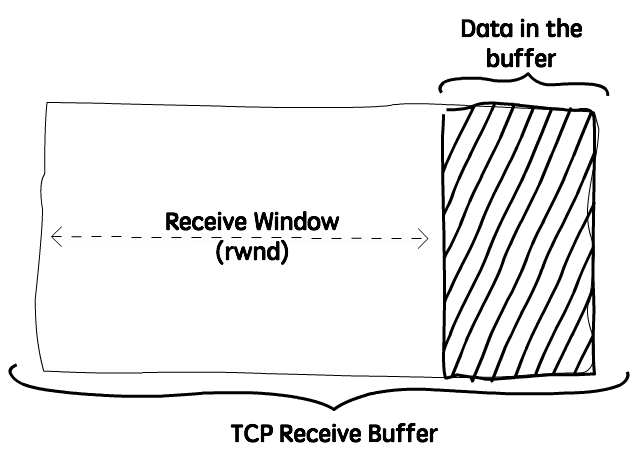 Every time TCP receives a packet, it needs to send an ack message to the sender, acknowledging it received that packet correctly, and with this ack message it sends the value of the current receive window, so the sender knows if it can keep sending data.

Let’s say we want to send a 150000 bytes file from node A to node B. TCP could break this file down into 100 packets, 1500 bytes each. Now let’s say that when the connection between node A and B is established, node B advertises a receive window of 45000 bytes, because it really wants to help us with our math here.

Example of a sliding window. As soon as packet 3 is acked, we can slide the window to the right and send the packet 8.

Now, if for some reason the application reading these packets in node B slows down, TCP will still ack the packets that were correctly received, but as these packets need to be stored in the receive buffer until the application decides to read them, the receive window will be smaller, so even if TCP receives the acknowledgment for the next 10 packets (meaning there are currently 20 packets, or 30000 bytes, in flight), but the receive window value received in this ack is now 30000 (instead of 45000), it will not send more packets, as the number of bytes in flight is already equal to the latest receive window advertised.

The sender will always keep this invariant:

Just to see this behavior in action, let’s write a very simple application that reads data from a socket and watch how the receive window behaves when we make this application slower. We will use Wireshark to see these packets, netcat to send data to this application, and a go program to read data from the socket.

Here’s the simple go program that reads and prints the data received:

This program will simply listen to connections on port 3040 and print the string received.

We can then use netcat to send data to this application:

And we can see, using Wireshark, that the connection was established and a window size advertised: 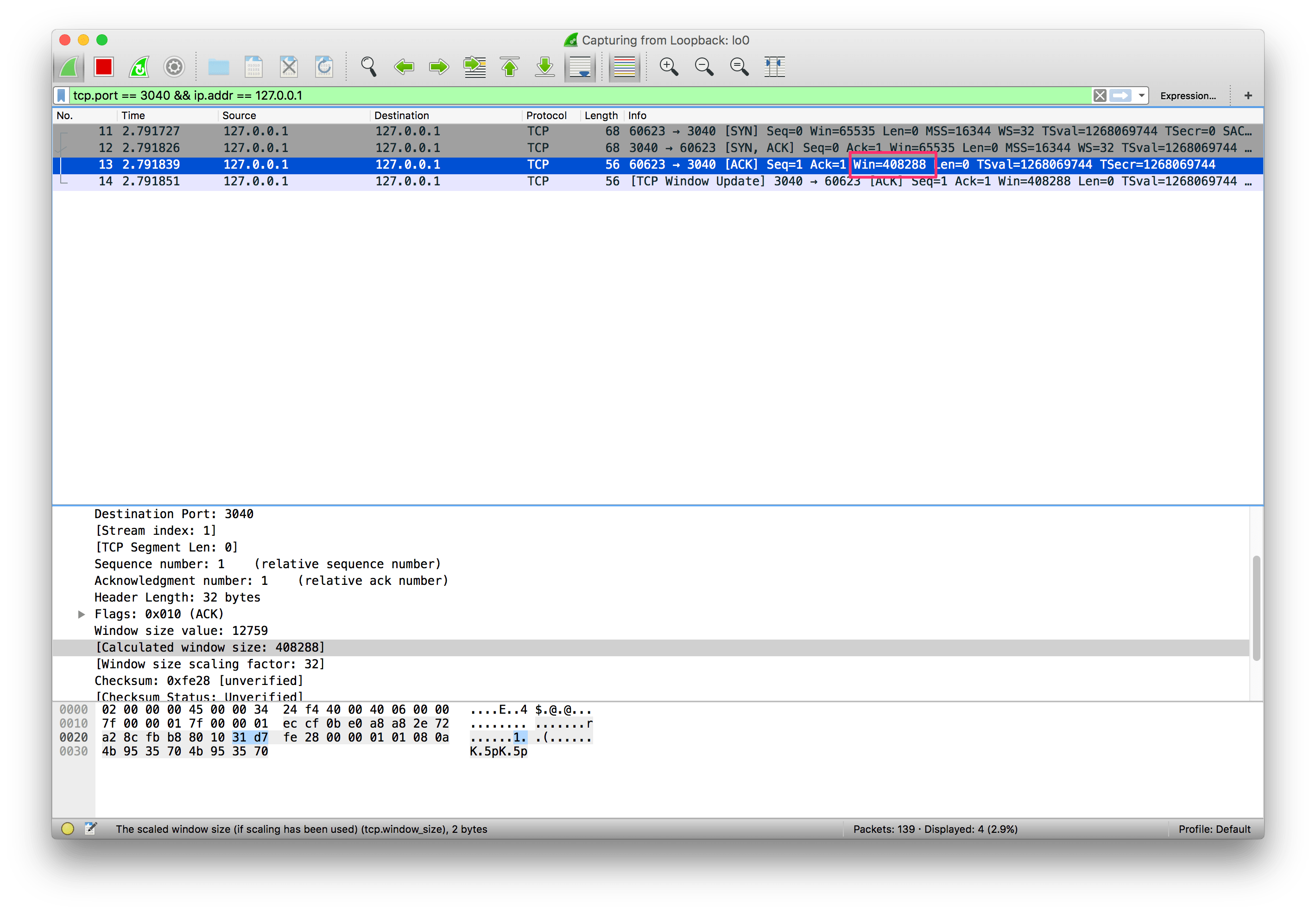 Now let’s run this command to create a stream of data. It will simply add the string “foo” to a file, that we will use to send to this application:

And now let’s send this data to the application:

Now if we check Wireshark we will see a lot of packets being sent, and the receive window being updated: 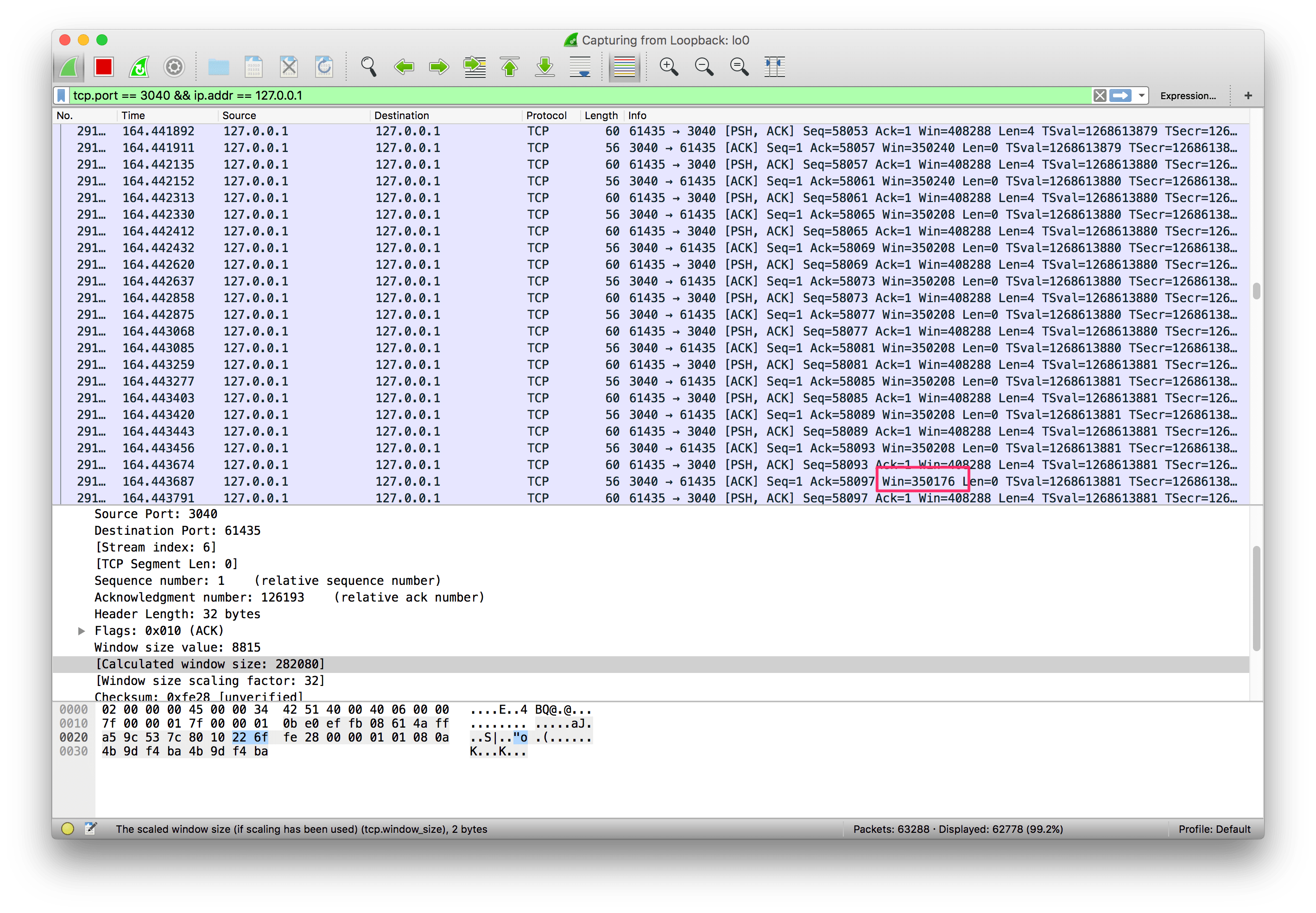 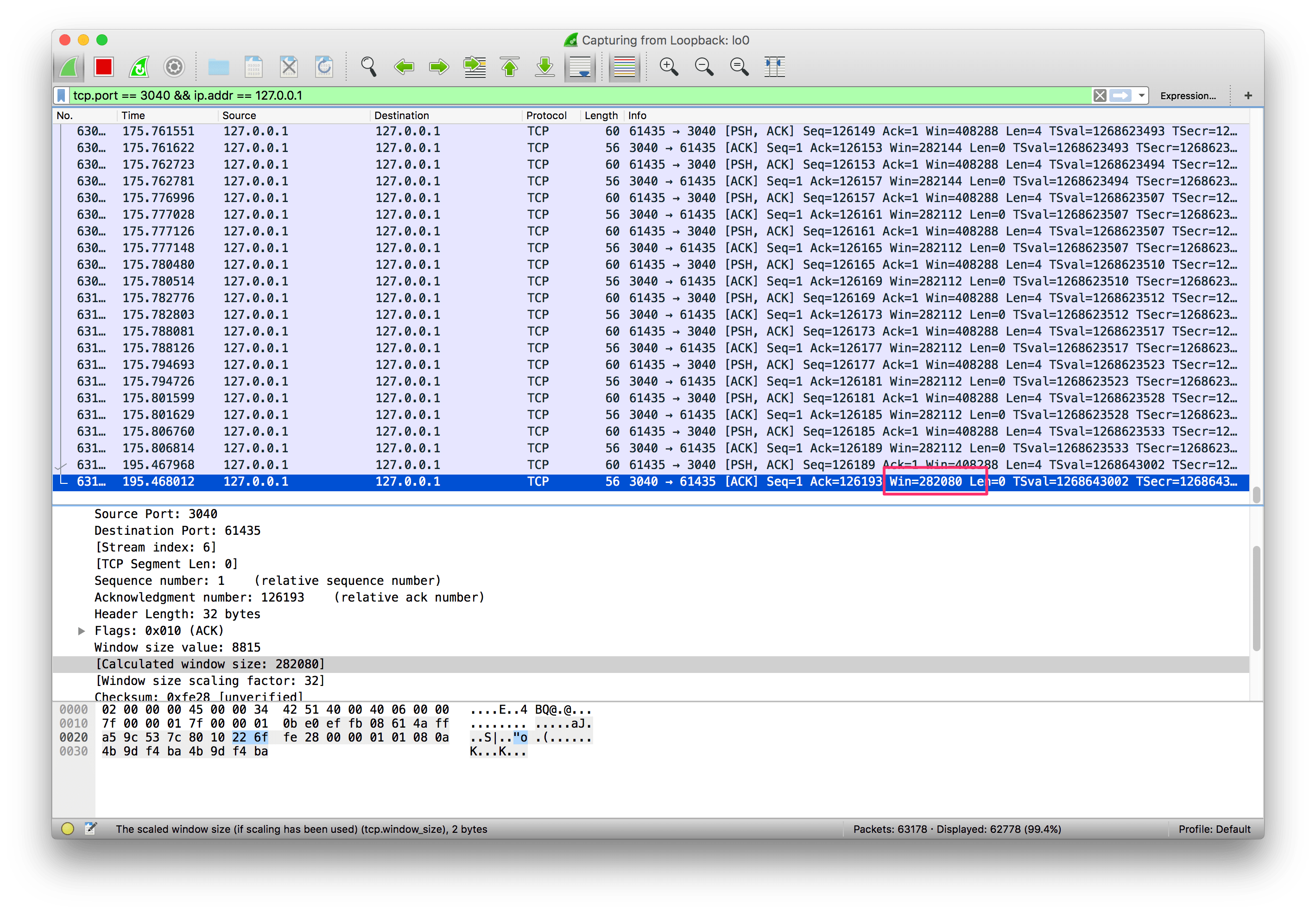 The application is still fast enough to keep up with the work, though. So let’s make it a bit slower to see what happens:

Now we are sleeping for 1 second before we read data from the receive buffer. If we run netcat again and observe Wireshark, it doesn’t take long until the receive buffer is full and TCP starts advertising a 0 window size:

At this moment TCP will stop transmitting data, as the receiver’s buffer is full.

There’s still one problem, though. After the receiver advertises a zero window, if it doesn’t send any other ack message to the sender (or if the ack is lost), it will never know when it can start sending data again. We will have a deadlock situation, where the receiver is waiting for more data, and the sender is waiting for a message saying it can start sending data again.

To solve this problem, when TCP receives a zero-window message it starts the persist timer, that will periodically send a small packet to the receiver (usually called WindowProbe), so it has a chance to advertise a nonzero window size. 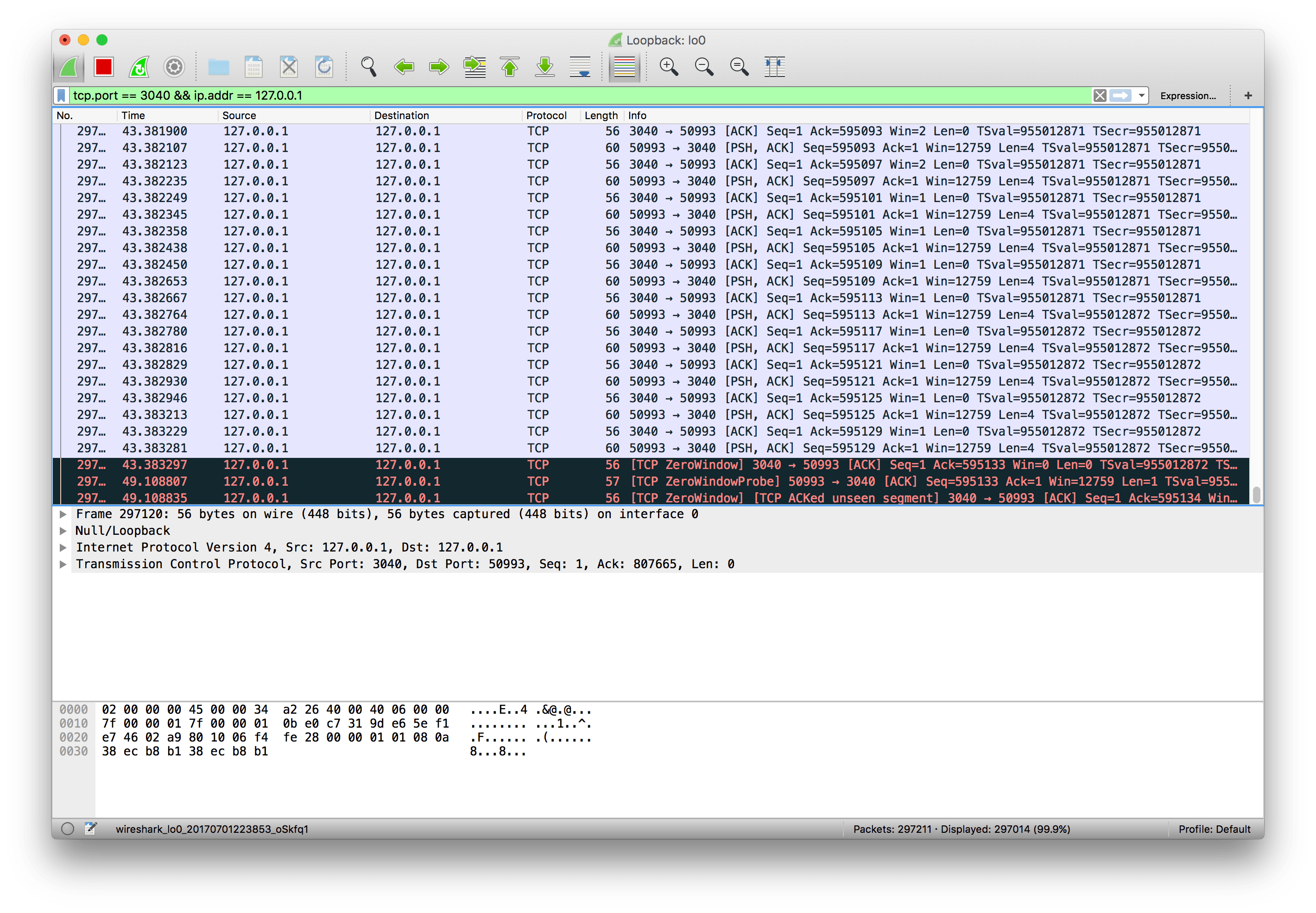 When there’s some spare space in the receiver’s buffer again it can advertise a non-zero window size and the transmission can continue.

If you want to learn more about TCP (and a lot more), the book Computer Networking: A Top-Down Approach is a great resource.